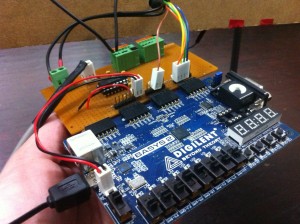 If the above picture looks intimidating and scary, then ‘join the club’ – but using electronics to monitor the finishing of cars in a Pinewood Derby – now that’s exciting! At times this can also be necessary if there is just 0.01 seconds between cars finishing, which can be tricky to judge by eye.

If the above picture looks interesting, and you have a curiosity for things involving wires, volts and sensors, then read on…

What I really love about Scouting, in my experience, is that you get to meet a wide range of people from different backgrounds, especially in volunteering roles. People investing their time and energy for a whole host of reasons, in such a variety of different ways. So, after floating the idea of running a Pinewood Derby within my Scout Group, it wasn’t too long before I managed to get introduced to a few professional Electrical Engineers who I had found amongst the leadership team within our District who were able to lend a hand!

Essentially, to start with, a Pinewood Derby electronic finish line you have a starting gate microswitch, which tells your processor that the race has started, and an array of sensors positioned under the track at the finish line which “see” the cars as they pass. From this information the processor can tell you the order in which the cars crossed the finish line, and how long it took each of them to finish the race.  The sensors that are used might work by detecting a reflection of infrared light (for example) from a source (LED) that bounces off the bottom of the car to the sensor, as it passes. Alternatively, you could use photoresistor type sensors, which can detect a beam being broken, otherwise known as a shadow(!), when it comes to visible light, for example.

There is a lot more detail that can be found on this subject on the internet, but I have enjoyed starting to look into what might be possible with an Arduino and Raspberry Pi!